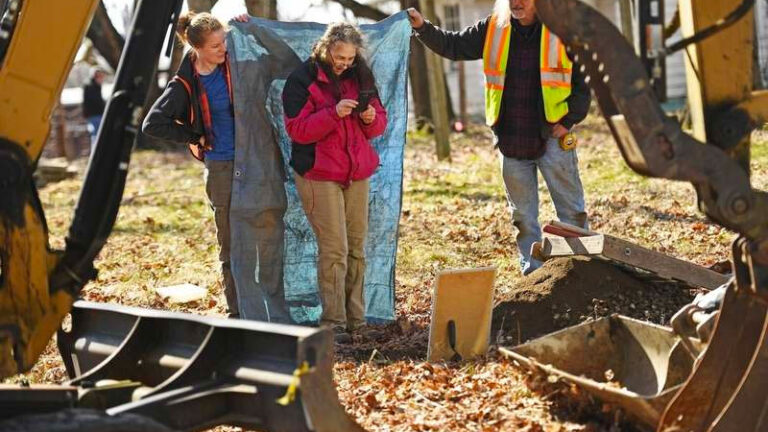 Norwich — Crews from the archaeological firm Historical Perspectives Inc. drilled several test pit holes in the rear of properties at 61, 63 and 65 Town St. on Thursday before construction of a proposed Burger King restaurant on property that abuts a colonial burial ground.

Three small houses from the 1920s now sit on the property at 61-65 Town St., where the Providence-based Amaral Revite Corp. plans to build a Burger King restaurant with a drive-thru lane. The project was controversial when proposed in 2018 for its proximity to the cemetery, where headstones stand just inches from the rear stone wall that separates the properties.

The Norwich Historical Society November 2018 reached an agreement with the developer for an enhanced buffer zone, additional plantings to improve the separation between the two properties and support for the state archaeologist’s recommendation to conduct an archaeological dig to ensure there was no evidence of Colonial-era burials.

The report, done by Historical Perspectives Inc. of Westport, stated the only bones discovered buried on the properties were food-related butchered animal bones and a tooth. Most of the artifacts uncovered were either building materials — including possibly the entrance stoop stone from the mid-1700s house on the property — food related items and other household items, such as medicine bottles and broken ceramics.